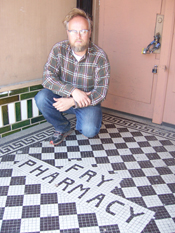 Keep as much of the building’s amazing 1930s-style interior intact as a time capsule.

Try not to change anything, maybe not even paint…
The walls in here are a pale hospital green paint from the 50’s and is such that you can’t recreate it.

When you step into the Fry Pharmacy you really get transported back in time…
It has the feeling of going into Motown, Stax, Sun, or Chess back in the day…

and the vibe is REAL.

It is not trying to be retro, It just is.

Good old construction… brick and plaster.
Keep the 1950s tile (you know, like the floor at Sun Studios in Memphis).  This kind of floor sounds kind of dead but in a really excellent way.

One really bright reflective room and one neutral-sounding room is good.

For recording, bigger really is better.  You can always make it small, but you can’t realistically fake big.

We don’t have a control room…
all the gear is just out, open-air style on the neutral side of the building.  So everybody is in the same room… which I really like…

With no control room, it is more like you are hanging out and not sitting behind glass, passing judgment.

The old front window displays are slowly becoming our iso booths… when we need them.

We have a easy to use multi-channel headphone system, but, we have discovered that if you just get people comfortable with their live blend of the amps and drums and stuff, people play much better.  And that, translates to tape

Sometimes we even just set up a vocal PA in the room and just deal with the bleed.
I would rather have a good performance than no bleed.

Use our real plate reverb, and real tape delays.  Use spring reverbs!  Use our Echo chamber.  Your recording is the most important thing you are doing, use the real stuff.  No Plug-ins.

When I first opened the Fry Pharmacy I was lucky enough to have the bass player Bob Babbitt play on a bunch of sessions here!  Bob was the one of the house bass players at Motown… played on hundreds of hits…(listen to the bass on Midnight Train to Georgia… that’s him, damn) of course I tried to learn as much as I could from him.
Bob told me that in his time at Motown they didn’t use headphones, they all plugged into ONE amp
and just made a blend…
if they couldn’t hear the drums,
they played more softly and the drummer played harder… but they as a band were making *a sound* as a whole.

*THAT is what I’m after at the Fry Pharmacy.*

*Documenting what is happening in the room*.

Of course, we do, do whatever it takes for the artist to feel comfortable and whatever feels best for putting the song down to tape.

We are heavily into esoteric forms of mic placement
(I was obsessed with Mid-Side recording for years)…
but also sometimes just “one 57 in front of the drums”
is what sounds right for the band.  and I can get behind that.
Something about the lowly 57 that just
holds things together in the mix…
Maybe it is the mono thing – I don’t know.

What we are recording to:

All projects are recorded on analog tape.

We may have the largest collection of analog tape machines on the planet under one roof… I think at last count we had something like 23 tape machines, but quite honestly, we have so many I don’t really even know anymore!

Here is a short rundown of the tape machines in our collection that get used the most:

AN AMAZING 1972 AMPEX MM1200 2 INCH 16 TRACK: Most projects are recorded this tape deck. I think that the 2 inch 16 tracks as a format in general, are the ultimate expression of analog tape recorder technology.  it is my opinion that with the invention of the 24 track…we started the long down hill slide of fidelity to where we are at today…16 tracks is plenty of tracks to multi mic stuff without feeling that you are compromising and as well leaves plenty of tracks open for overdubs.  And fidelity-wise, it is hands down the best multitrack format.

For the albums, that we and the artist feel like the limitations of 3 track(!) or 8 would better serve the project. believe it or not sometimes it is those limiting factors that can the most freeing to an artist.  We recently recorded 4 bands that are all on the same record label…at once! There were 23 musicians playing! We decided the only way to do this would be to sub mix through our 3 tube mixers live and directly to the 3 track.  Thus taking the possibility of over-dubs and “touch-up” punches, etc out of the equation.  It actually had a freeing effect on all the different personalities that comprise 4 bands and everybody involved just rose to the occasion.

Sometimes a project is best served with a track count limitation.

A couple of tube Ampex 351 tape decks:
A mono deck and and another stereo deck.  This stereo tape deck used to reside in the RCA New York Studio. It is the actual deck that was in the RCA mobile truck throughout the sixties…
very well maintained…. because it was RCA.

The 351/350 is also the same model that my idol Rudy Van Gelder used to record all the beautiful Blue Note records.

The 351, has that classic hi-fidelity “open, clear and punchy” tube sound.  Most of the american studios in the 50’s and up till the mid sixties used the Ampex 351/350 series tape machines.  A really satisfying sound.

As a side note, we have six channels of these 351 preamps, the microphone preamp section of them is simply amazing.  Easily my vote for the top 3 or 4 best sounding mic pre ever.  To me they sound perfect.  We use these microphone preamps from these decks daily…

An Ampex AG440 from the sixties.  Nice when you want to impart that late 60‘s early 70‘s vintage sound.

Our studio is packed with a ragtag bunch of vintage musical equipment and we want everyone who records with us to feel free and inspired to use.  This gear is for you.  No, you won’t be hit with a surprise rental invoice at the end of the session.  I was shocked the first time I heard that a studio rented that cool guitar amp sitting in their studio.  Just ain’t right, come on now, people.

Obviously we are hard core analog tape heads (about 90% of all of our recordings are 100% stay on analog tape for the whole project), but we’re not ludittes and can transfer to Protools to overdub if we need more tracks (and don’t want to bounce or sync two machines).  We can also transfer your tape to wav. files at the end of the album, just in case you need to do a alt mix 10 years from now and just can’t make it back to remix with us.

We use a lot of tube/transformer based gear,
hit tape AND our room sounds really,
really good.  Transferred in to protools, the project will retain most of that.

Recording straight to digital is flat and boring as compared to a well made analog recording.  Yes, use of  a cool colorful preamp and compressor will help a digital recording, however, it will never sound the same as recording to tape, this is due to the subilties of tape machine alignment, bias and recording level (which imparts more or less tape compression). These tape specific elements are the real critical elements that makes the pre digital recording techniques sound so timeless and classic…and right to the ear.

Buy a reel of tape and do your project analog…
you will not regret it.